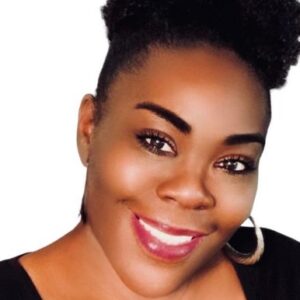 Kesha Monk has been wowing people with her voice for over 25 years. Kesha’s professional
career began as a radio personality in Raleigh, North Carolina. Her talent took her to many
cities across the country including major markets such as New York, Los Angeles, Chicago &
Boston as a radio personality. Additionally, she was the co-host of a syndicated countdown
show with Randy Jackson of American Idol fame. Randy Jackson’s Hit List ran for 5 years and
aired in 50 US cities and internationally in Japan and Kenya.
After 20 years in radio, her career path shifted after a devastating cancer diagnosis. During a
chemotherapy break, Kesha decided to enter a contest that was awarding a hefty voiceover
contract. Coincidentally, her actual audition was a script that included the role of a cancer
patient. Because cancer was her reality, that audition got her in the door of a reputable talent
agency and catapulted her into the world of voiceover.
She has recorded projects for global brands such as Mcdonalds, Dreamworks, Busch Gardens,
SeaWorld, Coca Cola and more. Her voiceover work has spanned many genres of voiceover
from narrating a children’s audiobook as well as DJ Khaled’s podcast, “THE FIRST ONE” on
Amazon Music. She has previously voiced spots for the Michelle Obama Podcast and more
recently voiced a video for President Biden’s Democracy Summit. In Spring 2022, Kesha
entered her 5th season as the continuity voice for POV, a weekly documentary series that airs
on PBS. She also is the live announcer for the Soul Train Awards which airs on BET, the most
prominent television network targeting African American audiences. She recently made
history as the first African American woman to live announce at the Tony Awards.
She is among a distinguished inaugural group of 30 professional women broadcasters whose
contributions and stories are being preserved in partnership with the Library of Congress
Radio Preservation Task Force & the AUCC Robert W. Woodruff Library. She has been
featured in Black Enterprise Magazine, BET, and The Al Sharpton Radio Show. She is a
member of Delta Sigma Theta Sorority and graduated from Shaw University where she
earned a Bachelor of Arts degree in Mass Communications.
Her passion for radio & voiceover along with her tireless energy, determination, and dedication
will make Kesha Monk one of the nation’s most dynamic voices in history.